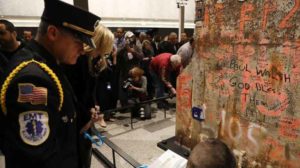 Two unions, which together represent more than 4,700 EMS workers, said their members will testify about how important these health benefits are at a hearing later Monday.

In September 2017, Gov. Andrew Cuomo expanded unlimited sick leave benefits for 9/11 first responders who live outside the city and were involved in the rescue, recovery and cleanup efforts. And similar benefits are available to NYPD and FDNY members, but not for FDNY EMS workers, said Oren Barzilay, president of the FDNY’s EMS Union, Local 2507.

“I implore Mayor de Blasio to honor his words and not forget the heroic actions of our EMS workers,” Barzilay said.

In a statement on Monday, de Blasio said he hopes to work with first responders.

“New Yorkers who responded to the attacks on 9/11 and its aftermath are heroes. Their service helped us rebound stronger and more resilient than ever,” he said in a statement. “I am committed to working with these brave men and women to get them the help they are owed by our city. I am confident we’ll find a solution that fully honors their service and sacrifices.”